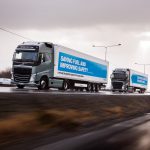 How Soon Will You Platoon?

If you’re interested in trucking as much as we are at Smith Transport, you may be following the latest news in transportation. Some of the most common articles we’re picking up these days have to do with the impact of advancing technologies in the industry as a whole. Needless to say, there are numerous ways this will happen, but some of the more commonly touted ideas – like driverless trucks – are probably further away than one may think.

But that’s not to say that new technologies won’t have a great impact in the form of smaller steps. For example, let’s take a look at “platooning,” a new practice comprised of a number of trucks equipped with state-of-the-art driving support systems – one closely following the other.

Platooning is a form of a practice more familiar to old-timers as a convoy and combines safe technology with the otherwise-risky art of “drafting.” Platooning involves running two or more trucks in close formation in order to save fuel, increase safety, and free up the roads. Modern platooning is made safe by incorporating automatic systems to make such close following safe and reliable. Essentially, the lead truck communicates breaking and acceleration commands to all following trucks in real time, allowing the platoon to move along safely in unison based on the actions of the lead driver. With advanced platooning techniques, the issues of poor visibility and delayed reaction time are mitigated.

Of course, these technologies still require the presence of a driver for steering, parking and more advanced maneuvering, as well as a watchful eye on road conditions. Some steering controls may be added later, but the industry doesn’t seem to be there quite yet. Either way, the practice is sure to be popular with truck drivers and the folks who pay them, as it can increase efficiency by several percentage points. Heck, what if one day you could catch up on your off-hours while your rig rolls smoothly along in platoon? Over the millions of miles we log in this industry, that has the potential to add up to some healthy savings for everyone.

According to a more complete analysis by an attorney active in the trucking industry, platooning doesn’t require near the regulatory scrutiny that would be required by truly autonomous or “driverless” vehicles. That should ensure that platooning makes a major appearance on our roads long before any robotic rigs take to the turnpike.

But just how soon you may ask? Well, the Dutch Ministry of Infrastructure and the Environment has thrown its weight behind the European Truck Platooning Challenge, which recently completed a trouble-free test of the technology over approximately 1,200 miles of public roads in Europe. And stateside, a Volvo executive noted in 2015 that he expects the technology to hit the roads in just a few years.

So you may not see any real-life platooning tomorrow, but you can bet you’ll see it sooner than later!

Want to hear more about how the trucking industry will evolve and grow? Keep your eyes on the Smith blog. Are you also interested in evolving and growing your driving career in the trucking industry? Give one of Smith Transport’s recruiters a call at 866.265.3718 or take a moment to apply online.