Greg Puryear of Smith Transport: A Lifelong Love of Driving 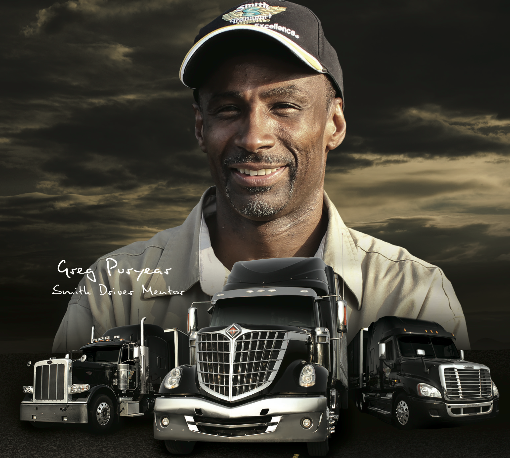 Even though Greg Puryear has been driving for over two decades and has been honored as Driver of the Year on two separate occasions, he says he still learns something new every day. This Wisconsin-based father of five, who serves as a company driver for Smith Transport, says his love of trucking goes back to when he was a boy.

“I’ve always been fascinated with trucks. Even after I finished two years of college studying computers, truck driving was still in the back of my mind. So when my older brother—who I had always looked up to—decided to go to truck driving school and encouraged me to go with him, I did. Afterward, he got a job driving locally but I decided I wanted to go over the road,” says Puryear. “When I was driving for another company I would see the shiny black and chrome Smith trucks out on the road. I wasn’t dissatisfied where I was, but I was intrigued by how professional Smith drivers were and what good equipment they had.”

That was back in 2002. Today, Puryear has logged 11 ½ years driving for Smith Transport and says he still loves it. “At Smith, they treat you like they want you around. You get a lot of respect from the company and are part of a family. You walk in and everyone knows you by name; they ask about your family and want to know how you’re being treated,” he said. “And they have the best-looking, best-maintained equipment on the road. They don’t put you in junk; everything’s got to be top notch here. That’s just who they are. They’re a company with style and they do things right.”

“I’m very satisfied with the miles and income I get. My checks are really good and I’m definitely making more than at my last company. And one of the best things they have is a mentoring program, where when you’re a new driver they give you the name of an older driver who you can call to ask any questions you might have. It lets a driver know he’s not out there all alone. I’ve enjoyed being a mentor; I’ve made some good friends who I still talk to almost every day.”